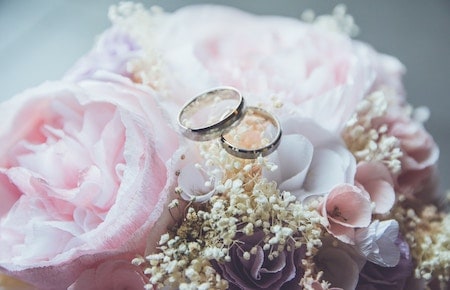 Arrival of the Queen of Sheba (Handel)

This beautiful classical work is commonly performed as a recessional at weddings and at other joyous occasions. The opening of Act 3 from Handel's opera Solomon, it is recorded here from Handel's original scoring for string orchestra, two oboes, and harpsichord.

A processional for all seasons! This famous march is commonly used while the party enters in weddings, or as an alternate march in graduations, and is a common trumpet feature. Performed here by piccolo trumpet, pipe organ, and double bass.

The wedding march from Wagner's opera Lohengrin, later made famous as the melody of "Here Comes the Bride", with organ covering the choir parts. A traditional processional, the original orchestral scoring is both grand and delicate.

Mozart's "Wedding March", the Finale of Act III from his opera "Marriage of Figaro". A beautiful march for full orchestra, this is often used as a processional at weddings.

This famous wedding march is originally from Felix Mendelssohn's suite of music to Shakespeare's play A Midsummer Night's Dream. Often played on pipe organ, this is a recording of the original orchestral scoring. A grand, triumphant piece, it is often used as a recessional at weddings. <br><br> Intended as a brief recessional after a wedding, this version ends after the main theme has been completely stated, at just under two minutes long. The last six minutes of the original piece, not included here, involve several new themes which alternate with the main melody.

An incredibly popular piece of baroque music, often played at weddings and graduations. This is the original arrangement by the German composer Johann Pachelbel, for three violins, cello, and harpsichord.

An instrumental version of the famous Bach aria Sheep May Safely Graze, recorded here with two flutes, cello, harpsichord, and violins on the melody. A beautiful and well-known work, it is often used to set a peaceful mood at the beginning of special events. For a backing track version that leaves out the violin part to make room for a soprano soloist, see track 1302.

A beautiful and well-known soprano aria from Bach's Hunting Cantata that sets a gentle, peaceful mood. Recorded here from Bach's original score with two flutes, solo cello, and harpsichord. This version is intended as a backing track for a soloist. For a complete instrumental version that includes the melody on violin, see track 1303.

One the most famous pieces of Baroque music, the beautiful Air from Johann Sebastian Bach's Orchestral Suite #3 in D Major is commonly performed as a prelude at weddings, graduations, and other special occasions. A later arrangement that made the melody playable on one string of the violin gave it the nickname "Air on the G String." Often arranged for soloists, this recording is from Bach's original score for string orchestra.